The Cat from North Finchley

December 16-23rd of 2018 I was planning to go back to England to visit my then British girlfriend in Kent, to be with her for a week and meet her family.

A month before that was when things finally fell apart. We broke up, and things just got ugly and confusing and awful.

Going to see her even though we broke up was still up in the air, I wanted to at least get some closure. I was heart broken among many other things. I was in lots of tooth pain, as I'd had four cavities filled, and then an emergency root canal, which contributed to making eating extremely difficult.

Diarrhea, insomnia, crying, obsessive writing and ruminating were common themes for me at this time. I also had to finish up my college career (writing four research papers) and now reschedule my trip to England.

Things were very stressful and hectic, but I decided that I still wanted to go to London, because I had the plane ticket and I could visit my friend Suhaila, who I also met in my six months studying abroad in Bath, England.

So I went, I was contemplating contacting her once I arrived in England even though she did not want to see or hear from me. I thought  "I'm back in the country we met in, and we probably won't ever see each other again after this, we were supposedly in love, maybe we could see each other to get some closure."

Suhaila lives in North Finchley, which is a suburb of London. That was about an hour and fifteen minute drive to Kent.

I would mention possibly going to see my ex to most people I encountered on my way there. Most people were "nice", and told me she would see me, and some told me to forget her and go have fun in London. Part of me knew I shouldn't reach out, and doing so would open the door for more suffering.

So I flew in, got a ride from the airport to North Finchley to Suhaila's house to meet her mom. She's a lovely woman, she made me a delicious Lebanese breakfast, (Eggs, bread and butter, tomatoes and olives, with juice and coffee (I really like olives now because of this)). Her mom and I talked a bit, then she called me an Uber to my Airbnb for the week about 5 minutes away.

I set up shop in my new room, and spent the next few days getting groceries, exploring the neighborhood, and trying to get on a decent sleep schedule. Suhaila was busy the first few days so I was on my own. I also spent time writing, watching Netflix, and contemplating what I could say to my ex to get her to see me.

Three days in I was having trouble sleeping. I was up all night, I watched some Netflix and wrote, and went to sleep around 9am. I woke up and it was dark outside, I looked at my clock and it said 5:00. I thought, "It can't be 5am."  It was 5PM! I had slept an entire 9-5 workday!!!

I took a shower, brushed my teeth and decided I would go out to a bar and have a pint in Finchley. I walked over to a pub, sat at the bar and ordered a Peroni. I sat by myself until an Indian-English bloke walked up to order some drinks. He looked friendly so I started talking to him.

He was a working father, enjoying some beers with some friends. His name was Kush, and he was lovely. He ordered his drinks, and as he was walking them back to where he was sitting I asked if I could join him, he said sure.

So I grabbed my drink and followed him over to his table. There was another older Indian-English guy, and a beautiful young lady sitting with them. I sat down next to the girl and the other guy.

"This is Luke"  Kush said as I shook the guys hand,  "Umar, nice to meet you, this is Natalie."  I then shook Natalies hand as her and I smiled at each other.

We began to have a fun conversation, Natalie had just met these two at this pub and then she joined them. I remember thinking to myself a few times that this was really cool, it was rare that I went out to a bar by myself and had made my way into a group like this.

Umar and Kush came to this pub after work most days before they had to go home to their wives. At first I thought that Umar was hitting on Natalie, but he soon said to me and her  "You two seem like the same age, you should get together, we'll be leaving soon."

I told them that I was visiting my friend Suhaila for a week and such. We all talked some more as Kush went back to the bar and grabbed us all some more drinks. He brought them back and sat next to me and said,  "Why aren't you chatting up Natalie, are you gay or something?"
"No"  I said.  "I'm waiting for you and Umar to leave, then I'll make a move."
He understood, as he seemed to be getting upset that I wasn't taking advantage of this opportunity.

Kush then ushered Umar away with him to get home to their wives and kids. I shook their hands and thanked them for a fun encounter.

Natalie and I we were sitting pretty close to each other, and we were talking until she got a phone call and got up to talk for awhile. She returned saying it was an ex boy friend, and she was flustered, because he said he was going to pick her up, but changed his mind so she could now stay at the bar, good for me.

I started to put the moves on her, putting my hand on her leg, then putting my arm around her, looking into her eyes, and asking her questions. She told me she used to be a stripper, she came from a fucked up family, and she wanted to become a life coach. I thought,  "Perfect, she's probably great in bed."

I then got into my mode one, direct dirty talk approach. I pulled her in close to whisper in her ear  "I want to take you home and fuck you."  She was intrigued now.  "You want me to come home with you and ride your dick?"  She asked, I confirmed that that was my proposition.

"I don't even know anything about you."  She said.  "Well, what do you need to know?"  I asked.
"What are you doing here in North Finchley by yourself? This isn't a place that guys like you come to visit for a week."
"I'm just visiting my friend."
"That can't be it, you wouldn't meet your friend in Finchley, unless you were dating them."

She figured me out, and it stung, so I told her that I was initially going to be seeing my ex and meeting her family in Kent, but had to pull an audible. So after I revealed some details, she told me about an ex boy friend she had from North Carolina.

Since we got that out of the way, I began to say more filthy things to her to get her aroused, and she would fluctuate between flirting or saying things like  "You really want me to come home with you and ride your dick?"  or . "Sorry, I've had enough of that in my life."  "Don't waste your time"  "I want a relationship with a nice guy now"  "If you'd asked me a week ago I would have done it."

I had it in my mind that getting laid on my trip back to England would somehow be a victory. All those months I'd spent on the phone with my ex. All that time spent not going out on dates or flirting with girls so I could see her and have amazing sex with her again would somehow be made up by bringing this new British gal back to my Airbnb to have a one night stand.

My final hail mary was  "You're going to regret not taking this opportunity with me."  She seemed to admit to that, and a pained look came over her face.

She offered to be my wing woman at the bar, and her NO finally sunk in and I became annoyed. I said  "I'm going to the toilet, then I'm leaving."

I went to the bathroom, and when I came back she offered to give me her phone number to possibly see each other before I left. I didn't want it, as I was going to be spending time with Suhaila for the remainder of my time there. She was hurt by this, and then we started arguing.


I left her there and she seemed sad. I walked down the street looking for something else, I didn't find anything so I went back the other way to head home. I walked past the pub and saw her crying and looking at her phone.

I went back inside to see her and she got up saying  "Why have you come back? Fucking men, I hate them."  She walked right past me and left.

I had an urge to chase her and console her, like I often did with my ex, and it was a point where I remember giving up that schema of trying to save the damsel in distress. I waited a bit, then I headed back to my Airbnb. 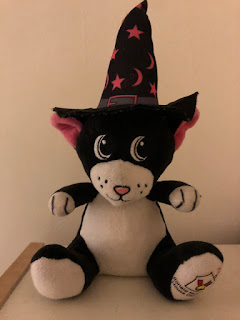 As I walked home I noticed something sticking out of a tree, it was a little beanie baby. A tuxedo cat with a black and pink witch hat. I picked it up and brought it home. It now sits in my living room.

I stayed up for quite awhile that night, then I spent the next four days hanging out with Suhaila and meeting her friends and family. She showed me around London, and we did a lot of really cool stuff.

My heart was still broken, and everything I did felt stained by the fact that I should be spending perceived quality time with the person I was holding out for in a long distance relationship.

Looking back, it was a great replanned trip, I was just in a poor state of mind. I had just been through some shit that I hadn't yet dealt with, and was back in the country that was the "cause" of it.

I'm glad I went back there, and I'm glad that I didn't reach out to her, because I'm 90% sure she would have told me to go fuck myself if I had proposed meeting up with her.