My first day in Prague with Beny

I was in Prague from May 26th to July 2nd in 2017with a Creative Writing class with Columbia College Chicago.

One of the first weekends there, my German friend Beny came to stay with me for the weekend, and he is one of the best people to have fun with in a place. And he is back in Chicago until November 9th! So I'm excited to be with him again.

He first showed up in Prague late at night, we met up with our fellow classmates at a pub, then went to sleep soon after to rest up for the next day.

We got up and went to get something to eat at a restaurant. Czech food is very good, but I was going very heavy on the goulash in my first week there and my stomach was not used to it. As Beny and I finished our meal we left and as we were walking down the street, I felt a fart coming, so I began to break wind and a little extra came out. So I went back to the restaurant to take care of this and Beny went off to go buy cigarettes. 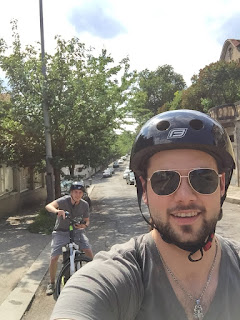 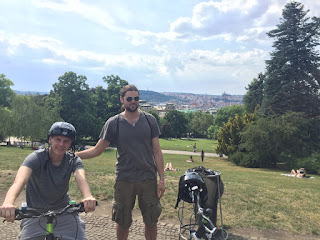 I cleaned up and found Beny near a scooter rental place. We soon rented these bad ass scooters for two hours and began riding around Prague in them! Good thing I shit my pants, or Beny might not have found these scooters. We went all over the city, up hills and down streets and it was a lot of fun. Beny is extremely social and friendly, so through out the day he was asking locals which places were the best to go to at night. We learned quite a few, and soon we went to see a British improv team called "Men With Coconuts" as a part of the Prague Fringe Festival.

After that we ended up going to the Stalin Monument that night. It's on a giant hill that you have to walk up many paved steps to get to. There's a big statue of Stalin there that you can sit near and overlook the city from. There was a DJ there playing techno, places to buy drinks, and we met some fun people, talked and had a great time.

Later Beny and I went to Cross Club around 1am. It was a really cool night club. From the outside, there was a bunch of little bridges connecting to one another, with benches and people hanging out.

Inside there was a couple of different bars and little dance areas playing good techno. Beny soon saw a group of three attractive ladies, and he approached them and we all started talking.

We soon found out that they were from a country called Georgia and they were all named Miriam. They had a spliff of some kind, that they began to smoke it and gave us some. I took a few hits and felt fine. For some reason I thought it was just tobacco. I began chatting up one of the Miriam's, as I felt some vibes of attraction.

The other Miriam handed me the spliff again, and there was a weird sense I got from this. When I hit it again, it came to me that there was something else in there other than tobacco. I began to get very in my head and anxious. I was still trying to hit on the one Miriams, and I had mustered up the courage to put my hand on her leg, and she was okay with this. We were attempting to speak to each other, but with the language barrier, it was difficult. I nervously moved my hand up closer to her thigh and back down again and she very overtly grabbed my hand and slapped it onto the table. This was embarrassing, and I continued to linger at the table for another few minutes awkwardly. I soon left and went to a table with Beny.

He was with some fellow German guys, and some Czech guys. They were beatboxing and rapping, but it died down quickly. I was sitting across from a Czech guy who started talking to me incoherently, and it was scaring me, as he was staring at me and taking long pauses between his speech.

We stayed in this club the whole night, I was soon walking around and talking with people from Scotland, Italy, Ireland, Germany, Spain, Canada, Switzerland, England and Prague.

I remember this one German girl approaching me and speaking to me only in German. She was very pleasant, smiling and touching my arm a lot. I only responded to her with things like "I can't understand what you are saying, I don't speak German." And she would respond in German, with a big smile and affirming head nods. It was like she was having a conversation with herself through me. She soon thanked me, squeezing my arm and walked away. She said no words to me in English, it was so bizarre and interesting.

I met back up with Beny, and as it got light out, we were talking with some guys and they asked us, what we thought of "E=Mc squared" and it delved into a deep philosophical discussion about being good and self discovery. Beny was saying that to him it meant letting go of your ego or "eggo" as he pronounced it, and becoming best friends with yourself. Other people said stuff like "The universe is within yourself" and "When we breathe we are breathing in God."

It was awesome to see all these different cultures speaking the same language of humanity.

We went home around 9am and after that night I became present to the magic of Prague, and I felt that European people are present to this magic of life and being a contribution to the universe.