So I posted a quote from this lady, I thought it was attention grabbing and hyperbolically relevant, so I put it up to get attention and to rile people up, which it did. 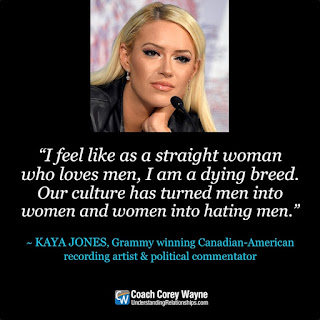 I discovered what I'm more upset about is in regards to language and in dating. I feel there is a double standard in the ability for women to shame men freely calling them trash/pigs/dogs. While men critiquing women, or critiquing women for shaming men is not okay. I suppose that is just the game, and I don't have to complain about it.

Most of what I am for is in regards to dating, and I believe that masculine traits are generally attractive to women, if used in the correct way. Not over the top aggression, and so on.

I'm hungry to learn and find ways to be more healthily masculine and I have been researching ways to practice it.  To create success, improve my self, and attract beautiful women into my life.

I can see how people could have interpreted this quote, as it is a bit of an attack. Although is has some truth to it in my opinion. People can be very sensitive and triggered, especially when things are posted online.

I don't like that what I did was somehow a political statement to people. Because it's not political, it's social, and people like to make things political these days. Many folks came out of the wood work to comment on it. People made some good points and shed some new light. I deleted it because it felt like clickbait, and it's not representative of me.

This is my blog, it has my name on it, and I am not "all" about dating, understanding women and masculinity. The amount of people reading my blogs has gone down since I began writing about this kind of stuff heavily. I imagine people interpret me through my blog posts and it's not accurately representative of me or my life.

What I also got from posting that quote was the amount of "being right" and "making others wrong" that came from it, which happens in politics all the time, and in life. Which is what I was doing too, trying to be right.

I became re present to that being what I dislike about politics and political correctness. The stubborn stances people take, and the unwillingness to listen or look wrong.

Something I've diverged from is sharing personal stories on this blog many times. Rather than fearing I am being preachy by putting out my beliefs, I'd rather share embarrassing or funny stories, because I don't care if you're offended at who I am.

I don't like to divide people, and just because we disagree politically or socially, shouldn't deny us from being friendly, or enjoying each other's work.

So, I'll be going back to sharing personal stories and experiences on this blog, and move my dating and male/female centered posts to somewhere else. As it is a side passion of mine.

I'm going to tell my stories how I want to, I like sharing things from my childhood and young adult hood, and I am offensive and filthy at times. I like to talk about sex and shitting and all the stuff they tell you not to talk about in school, church and at funerals.
Posted by Luke at 8:32 AM