Near the end of my Easter break in Bath, England I flew into Frankfurt to hang with the main German homie Beny. My main American homie Jonah flew from the states to the airport in Frankfurt as well. I met Beny through Jonah when he was visiting Chicago for six months from about April to October in 2016, prior to his return to Germany. 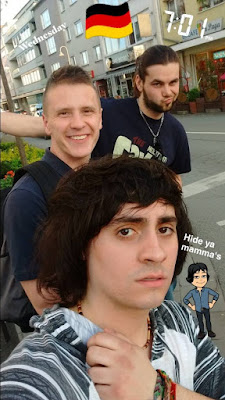 I then met up with Beny in Prague and Berlin in June of 2017. They were fantastic, fun filled times. Then Beny came to Bath in the first part of my break at the end of this past March, just for the weekend, he flew back home then I went to Ireland for a week. I came back to Bath, and met my parents for a trip around England, I flew from London to Germany and he Jonah and I hung out in his hometown of Mannheim and Heidelberg Germany from April 11th to the 15th 2018. It was a fantastic trip and THE REUNION of all 3 of us!

Jonah and I arrived on Wednesday afternoon, Beny had his driver friend Ade pick us up at the airport. Ade was a really funny and interesting guy. He didn't speak much English so he mostly communicated using driving and chicken sounds with his mouth. He made us laugh a lot on our way to Beny's and showed us all the hip hop songs from GTA San Andreas.

We stopped by Loopy, which is a mini red light district in Mannheim. I walked out there with only my phone and my passport, so I didn't feel that well equipped to talk to hookers. It was still cool, they were looking at us out the windows of their "houses" some were just in their bikinis looking at their phones on the bed. We went into one of the houses to look, one girl was all over Beny and he said "No sorry I have a girl friend" she was upset and playfully kicked him in the penis with her sandal before we left. We did not have sex with any of the respected hooker ladies.

Ade then took us to Beny's place. He is in training to become a nurse so he lives in a large apartment complex with lots of other nurses he is friends with. We spent that day walking around a bit, and bought some food for the next five days. We took it easy that night and went to bed early. Beny had school the next day, so he arranged for his dad to take Jonah and me around to Heidelberg.

Thomas! The father of Beny himself, came around 11am Thursday morning to take us on our own personal tour! Thomas is a really great guy, open, fun and friendly. He was the perfect tour guide. We went to a race track in Mannheim first to look at some old cars, bikes and to have lunch. I asked him for some life advice, just because he is the father of an amazing friend of Jonah and mine. Two things he said were "be open to everybody" and "life is learning." Just some tidbits fuh yo ass.


We then went off to Heidelberg, it is a beautiful and scenic student city, similar to Bath. Throughout the drive he would point things out to us and explain their history. We would make pitstops to beautiful parks, get out walk around and look for a bit.

We walked around one park right near a lake, and found two girls playing guitar and ukulele. Thomas went up to them, like he would do with a lot of strangers, just like Beny does. He asked them if they would play something for us, and then we would do some comedy for them. They acknowledged us at first and then somewhat ignored us and continued to practice (Hurt by Johnny Cash).

We hung around chatting for a bit, I guess Thomas could sense that they were still open to us doing some "comedy" for them. We agreed that we would freestyle for them if they played a beat. So they did and Jonah and I rapped for them. I was nervous and didn't want to do it, but we did it, and it was fun, and I'm glad we did that.
(View of Heidelberg) 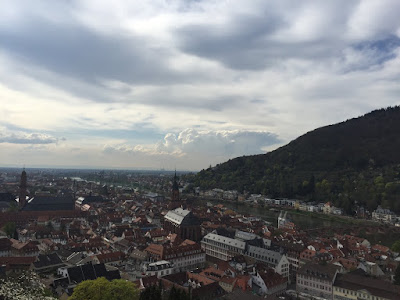 We left and went to Heidelberg castle. A relatively destroyed castle, with the interior still in tact. We all went in and explored it, then went to the top to see the beautiful landscape of Heidelberg. We left there and got some food, then Thomas took us back to Mannheim. We were gone most of the day and came back to meet Beny to go out to a college party.

We got there around 9pm to a large quad with a DJ, we got drunk and lots of German people kept yelling "Jesus" out at me so I would 'bless' them if necessary. We left a few hours later, we were free styling down the street kept finding wine on the ground. We ended the night at a night club called Zimmer's dancing to techno around 3am or so.

The next day was Friday, we went over to Beny's friend Kevin's house to hang for a bit. We were free styling and drinking, Kevin makes beats, and we would go back the next day to record stuff! Later, we went back to the same night club, Zimmer's for some good techno, we danced for awhile then we left around 3am.

We went to a bar called Rhodos and when we went up there a guy started to pick a fight with Beny outside. Soon after a girl came up to them asking the other guy who was arguing with Beny if she could have a cigarette from him. He did not want to give her a cigarette because he was busy being angry with Beny. The three of us boys left this angry arguing guy somehow and went inside to order some food as we were all hungry at 5am.

We all sat down and later the girl with her friend who was asking for a cigarette, was crying because that guy had grabbed her or hit her. She was speaking in German, then apologizing to us in English. There were some really loud people behind us, and a big scary guy standing up and looking right at us for quite awhile as our food came.

We began to eat in this chaotic and foreign environment when a random German dude came up to our booth to hit on the girl who was crying. He infiltrated our booth, adding to the weird vibe. He ended up getting his arm around her, he didn't want any of our food, maybe he scored that night, we ended up leaving around 5:30am and went over to a private bar/shop.

We bought some beer, we went in the back to play some arcaded games and darts. We left around 6 or 7am to walk home as the sun rose, it was a full and proper night out in Germany.

Saturday we probably got up around 3pm or so. We went out into town to Primark to get some clothes. My parents advised me to listen to Beny's fashion sense. He got Jonah and I some new shirts and pants (They call them pants in Germany too, not trousers.)

We went over to a hip hop event that was really cool. Some German rappers went up and rapped on stage for awhile, obviously we could not understand what they were saying, but we were still catching the vibe.

We went back to Beny's friend Kevin's house, the beat producer, we were free styling for awhile then we recorded a couple of songs. It was a lot of fun, and it encapsulated our trip as a trio, and is a great memory for us to have in a song form. It was great, we went out after that to a few clubs Beny made sure we saw all the good stuff. We went home around 3am.

We woke up and Thomas picked us up to drive us to Beny's home growing up. We got to meet his mom and see his brother Toby, who we had met once before when he came to visit Beny in Chicago. Toby took us to the airport, he dropped off Jonah, then the Hilbel brothers took me around Frankfurt to show me around. It was a cool city, I only saw it for about thirty minutes.

They then dropped me off at the airport, and I flew back to London, took a train to Bath to return to Uni the next day. It is always well worth it to see my friend Beny around Europe, we take each other to new places and make new fun times. And it was also amazing to see Jonah in Germany, as he brought Beny and I together.